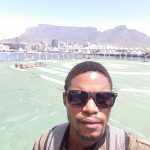 Tebatso completed his BSc and BSc (Hons) at the University of Limpopo where he majored in Biochemistry, Microbiology & human Physiology. In 2015, he joined the CSIR (Biosciences, Pretoria) on an MSc scholarship where he completed his studies at the University of Pretoria. His research focus was on studying the pharmacology of phytochemicals of herbal medicinal plants (and concoctions) used traditionally in the treatment and management of a variety of ailments.

Tebatso joined SOCCO in 2019 on a PhD scholarship and is registered with the North-West University.
His PhD research focus is on phytoplankton (microscopic oceanic plants) and the metabolite they produce, Dimethylsulphoniopropionate (DMSP). DMSP plays a crucial role as a cryoprotectant in phytoplankton and has also been shown to support marine biogeochemical processes as a source of sulphur and carbon. Additionally, DMSP plays a role as a precursor of the climatically active dimethylsulphide (DMS) gas in the upper ocean. His research aims to improve our understanding of the links between phytoplankton, DMSP and the physical ocean. Understanding these links will inform the development of a remote sensing algorithm that uses satellite observations to derive DMSP
climatology in the northern Benguela upwelling system.