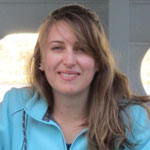 Sandi completed her undergraduate studies (BSc) at the University of Cape Town (UCT) in 2010, majoring in Ocean & Atmosphere Science and Environmental & Geographical Sciences. In 2011, she obtained her Honours degree in Ocean & Atmosphere Science from UCT. Her Honours work explored the relationship between anomalously warm/cold sea surface temperature events in the northern Benguela region and rainfall variability over Southern Africa.

During 2012-13, Sandi undertook a collaborative Master’s project (based at UCT, in partnership with SOCCO and the Sigman Lab at Princeton University), investigating wintertime nitrate isotope dynamics in the Atlantic sector of the Southern Ocean. Surface and depth profile measurements of the nitrogen (N) and oxygen (O) isotope ratios of nitrate (an important nutrient for phytoplankton growth) between Cape Town and the Antarctic winter sea-ice edge have provided a unique perspective on the biogeochemical and physical processes at work in the region south of Africa during winter. In future, Sandi hopes to extend her work in the modern ocean to paleoceanographic problems, such as defining the role played by Southern Ocean biology in regulating atmospheric CO2, and thus global climate, through past glacial/interglacial cycles.