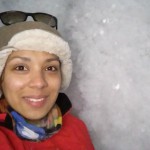 Natasha van Horsten obtained a National Diploma in Analytical Chemistry in 2010 at the Cape Peninsula University of Technology (CPUT).
She did her internship at CSIR in 2009 in the Analytical laboratory and was permanently employed in 2010. During her employment at CSIR in the Analytical laboratory, she completed her B.Tech in Chemistry at CPUT and graduated in 2013.
She joined the Southern Ocean Carbon – Climate Observatory (SOCCO) research group on an MSc studentship in 2013, under temporary employment at the CSIR. She undertook her MSc at Stellenbosch University, investigating the photosynthetic response of Southern Ocean phytoplankton under iron and light limitations, through bioassay experiments, graduating in 2015.
She completed her PhD in 2021, focused on early winter dissolved iron distributions and remineralisation in the southern Indian Ocean, which was done under a joint PhD agreement between Stellenbosch University, the University of Western Brittany (France) and SOCCO.
Natasha is currently a postdoctoral research fellow at the University of Cape Town funded by the SOCCO research group and the National Research Foundation, focusing on trace metal biogeochemistry under the land mass effect from subantarctic islands.