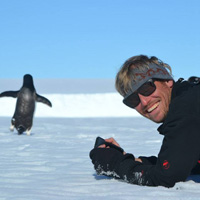 Senior Scientist: Dr Swart is a physical oceanographer who specializes in both satellite and in situ observations in the Southern Ocean. He is currently a Senior Scientist at CSIR in Cape Town and an Honorary Research Associate at the University of Cape Town. He completed his PhD in 2009 at UCT with extensive collaboration at the Laboratoire de Physique des Oceans, University of Brittany, France. He has been actively involved in Southern Ocean research since 2004 and is an experienced sea-going oceanographer after participating in 12 research cruises of which he was Chief Scientist on four of them to the Antarctic. His primary scientific interests involve large-scale open ocean circulation and dynamics as well as smaller scale ocean mixing processes and relating their impact on biogeochemistry and the oceanic carbon cycle.

Over the past four years, Dr Swart has been heavily involved in implementing a new national engineering facility on robotic ocean gliders in South Africa. These innovative instruments greatly enhance observational efforts in the Southern Ocean and boost national R&D activities. They provide a safe and cost effective means to observe the ocean at fine temporal and spatial scales over extended periods of the year, previously not possible using research ships alone. Within the community, Dr Swart provides leadership through service on international science steering committees, including his role as the Physics Vice-Chair of the Southern Ocean Observing System (SOOS). Dr Swart supports and advises masters and doctoral students and lectures graduate level courses on Southern Ocean dynamics and experimental design.