One approach to deriving phytoplankton carbon biomass estimates (Cphyto) at appropriate scales is through optical products. This study uses a high-resolution glider data set in the Sub-Antarctic Zone (SAZ) of the Southern Ocean to compare four different methods of deriving Cphyto from particulate backscattering and fluorescence-derived chlorophyll (chl-a). A comparison of the methods showed that at low (<0.5 mg m−3) chlorophyll concentrations (e.g., early spring and at depth), all four methods produced similar estimates of Cphyto, whereas when chlorophyll concentrations were elevated one method derived higher concentrations of Cphyto than the others. The use of methods derived from particulate backscattering rather than fluorescence can account for cellular adjustments in chl-a:Cphytothat are not driven by biomass alone. A comparison of the glider chl-a:Cphyto ratios from the different optical methods with ratios from laboratory cultures and cruise data found that some optical methods of deriving Cphyto performed better in the SAZ than others and that regionally derived methods may be unsuitable for application to the Southern Ocean. A comparison of the glider chl-a:Cphyto ratios with output from a complex biogeochemical model shows that although a ratio of 0.02 mg chl-a mg C−1 is an acceptable mean for SAZ phytoplankton (in spring-summer), the model misrepresents the seasonal cycle (with decreasing ratios from spring to summer and low sub-seasonal variability). As such, it is recommended that models expand their allowance for variable chl-a:Cphyto ratios that not only account for phytoplankton acclimation to low light conditions in spring but also to higher optimal chl-a:Cphyto ratios with increasing growth rates in summer. 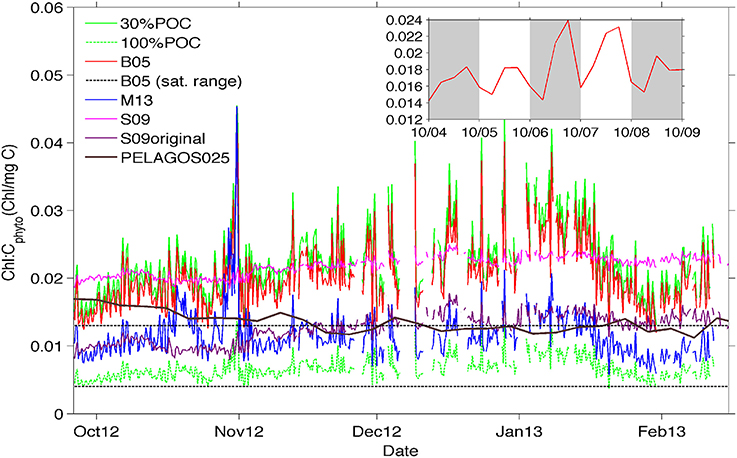 Time-evolution of chl-a:Cphyto ratios at the surface (10 m) derived from the 30%POC method (solid lighter green top line), the B05 method (red line), the M13 method (blue line), and the S09 method (pink line). In addition, Chl-a:Cphyto ratios were calculated using the chl-a:POC ratio from the cruise data (which implies that all POC is phytoplankton specific) and is presented as 100%POC (darker green bottom dashed line). Included for comparision are (1) the chl-a:Cphyto ratios derived from the original equation from Sathyendranath et al. (2009) presented as S09original (purple line), (2) the satellite range of ratios from Behrenfeld et al. (2005) (black dotted lines) and (3) the ratios derived from the PELAGOS025 model (McKiver et al., 2015, extracted from the model for the same geographical co-ordinates as the glider transect in time but for a year 2011 simulation, solid black line). The inset shows a detail of the daily signal for the B05 method.