Net primary production (NPP) fueled by nitrate is often equated with carbon export, providing a metric for CO2 removal to the deep ocean. This “new production paradigm” assumes that nitrification, the oxidation of regenerated ammonium to nitrate, is negligible in the sunlit upper ocean. While surface layer nitrification has been measured in other oceanic regions, very few data exist for the Southern Ocean. We measured NPP, nitrogen (N) uptake, and nitrification in the upper 200 m across the Atlantic Southern Ocean in winter and summer. Rates of winter mixed-layer nitrate uptake were low, while ammonium uptake was surprisingly high. NPP was also low, such that NPP and total N (nitrate+ammonium) uptake were decoupled; we attribute this to ammonium consumption by heterotrophic bacteria. By contrast, NPP and total N uptake were strongly coupled in summer except at two stations where an additional regenerated N source, likely dissolved organic N, apparently supported 30–45% of NPP. Summertime nitrate uptake rates were fairly high and nitrate fueled >50% of NPP, indicating the potential for significant carbon export. Nitrification supplied <10% of the nitrate consumed in summertime surface waters, while in winter, mixed-layer nitrification was on average 16 times higher than nitrate uptake. Despite the near-zero nitrification rates measured in the summer mixed layer, the classically defined f ratio does not well-represent Southern Ocean carbon export potential annually. This is because some fraction of the nitrate regenerated in the winter mixed layer is likely supplied to phytoplankton in summer; its consumption cannot, therefore, be equated with export. 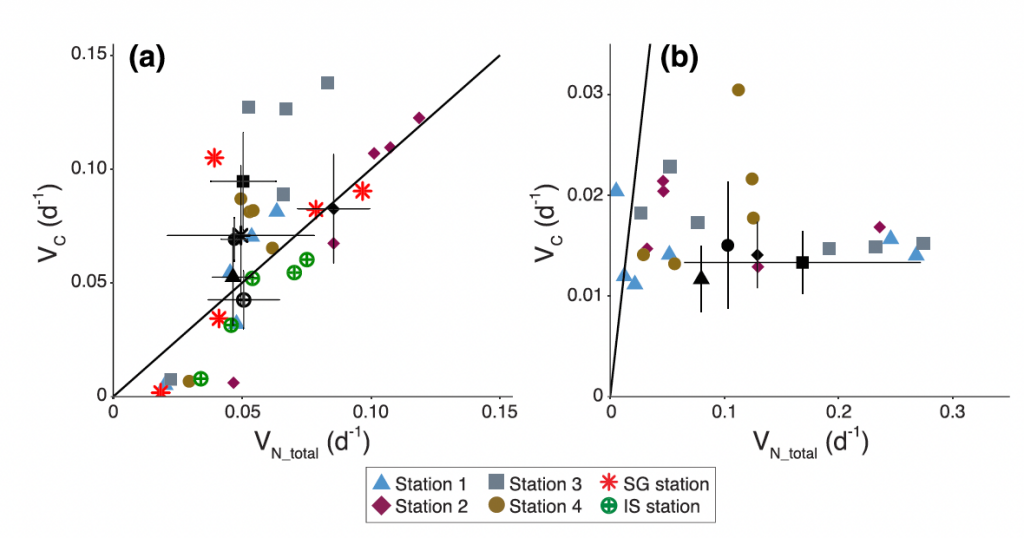 Specific uptake rates of carbon (VC) versus nitrogen (VN_total = VNO3 + VNH4) for (a) summer and (b) winter. Colored symbols show the rates at the individual incubation depths, and the corresponding black symbols represent the 0–200 m‐weighted average rates at each station. Integrating to the base of the mixed layer or euphotic zone rather than 200 m makes little difference to the averages because the specific rates at 200 m are very low. The solid
black line represents VC:VN_total = 1:1, which is expected for balanced phytoplankton growth assuming that the only N
forms being assimilated are NO3− and NH4+.