The Ross Sea is one of the most productive regions in the Southern Ocean, with a significant role in carbon cycling as well as the massive abundance of higher trophic levels. The seasonal cycle is well established with an early summer Phaeocystis antarctica bloom that declines followed by a diatom bloom in late summer. This seasonal progression of the phytoplankton has been linked to the availability of iron in the mixed layer. Investigating the temporal progression of iron limitation is often limited by both the decreased sampling resolution from traditional platforms, such as ships, and the lack of regular deployments of specific sensors that can measure phytoplankton physiology. Through the use of a novel technique that uses the degree of quenching (NPQGlider), determined from a standard fluorometer deployed on a buoyancy glider, a proxy for iron limitation, αNPQ, was calculated for a glider time series in the Ross Sea from December 2011 to February 2012. Surface chlorophyll concentrations indicated that there were four stages: the first being a pre-bloom phase, the second in which phytoplankton growth was rapid, resulting in the accumulation of biomass; the third in which biomass in the surface layer decreased, and the fourth in which chlorophyll concentrations remained low but the POC:Chl ratio increased. The levels of NPQGlider in this region were much higher compared to other Southern Ocean regions, with the highest levels in the third phase. Similarly, αNPQ remained low throughout most of the time series except for the transition from the second to third phase when the surface biomass decreases. The increase in POC:Chl ratios in the final phase combined with the low values of αNPQ suggest the switch from a Phaeocystis antarctica bloom to a potentially non-iron limited diatom bloom. These results confirm that the application of novel methodologies to proven and reliable sensors will provide a greater understanding of biogeochemical cycles and their controls throughout the ocean. 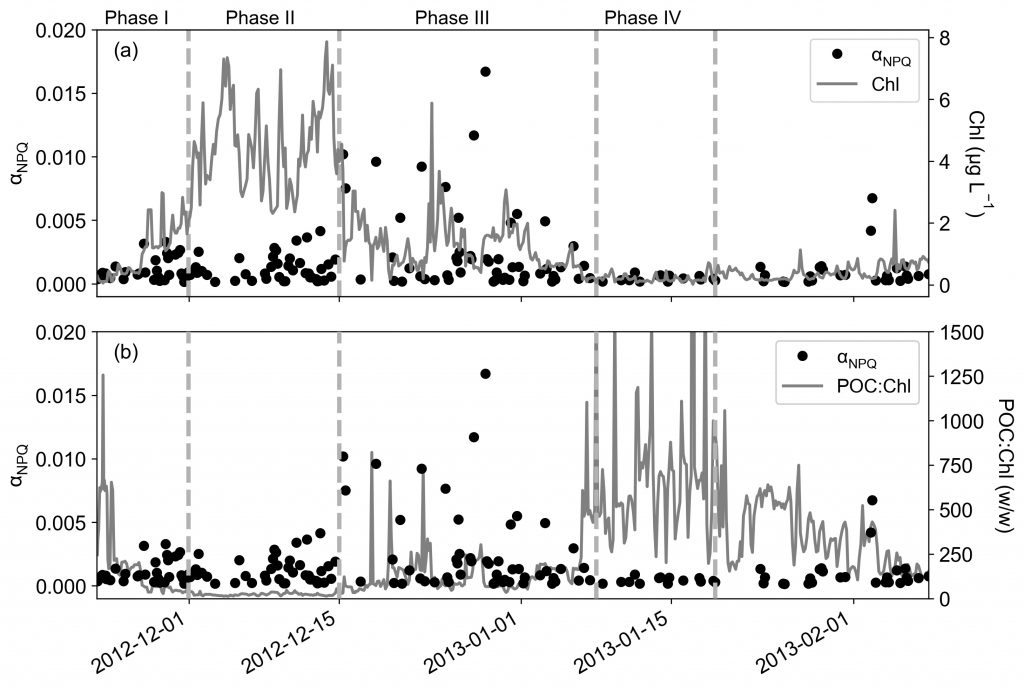 Temporal progression of the αNPQ with (a) chlorophyll and (b) POC:Chl. synthesis