Low levels of iron limit primary productivity across much of the Southern Ocean. At the basin scale, most dissolved iron is supplied to surface waters from subsurface reservoirs, because land inputs are spatially limited. Deep mixing in winter together with year-round diffusion across density surfaces, known as diapycnal diffusion, are the main physical processes that carry iron-laden subsurface waters to the surface. Here, we analyse data on dissolved iron concentrations in the top 1,000 m of the Southern Ocean, taken from all known and available cruises to date, together with hydrographic data to determine the relative importance of deep winter mixing and diapycnal diffusion to dissolved iron fluxes at the basin scale. Using information on the vertical distribution of iron we show that deep winter mixing supplies ten times more iron to the surface ocean each year, on average, than diapycnal diffusion. Biological observations from the sub-Antarctic sector suggest that following the depletion of this wintertime iron pulse, intense iron recycling sustains productivity over the subsequent spring and summer. We conclude that winter mixing and surface-water iron recycling are important drivers of temporal variations in Southern Ocean primary production. 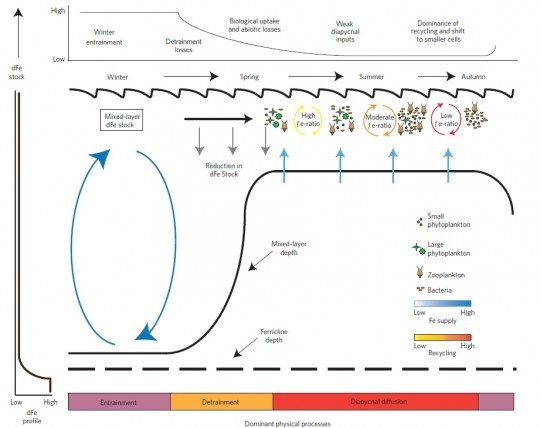