Availability of dissolved iron and light are both regulating factors for primary productivity in high (macro)nutrient, low chlorophyll regions of the Southern Ocean. Here, using on-board iron/light incubation experiments conducted in 2015 in the Atlantic sector of the Southern Ocean, we show that irradiance limited significant phytoplankton growth (in chlorophyll-a and particulate organic carbon) north of the Polar Front (46 °S 08 °E), while iron addition resulted in growth stimulation even at low light levels in the Antarctic zone (65 °S 0 °E). The phytoplankton community in the Polar Frontal Zone showed a greater functional diversity than the one in the Antarctic Zone. The community structure changed over the course of the incubations in response to increased iron and light. The observed increase in chlorophyll-a under high light in the Polar Frontal Zone was driven predominantly by an increase in pico(0.2-2 µm) and large (>5 µm) nanophytoplankton. Pigment fingerprinting indicated an increase in the contribution of diatoms and Phaeocystis over the course of the incubation. In contrast, in the Antarctic Zone, the increase in chlorophyll-a after iron enrichment was predominantly due to an increase in the contribution of diatoms and large nanophytoplankton. The photochemical efficiency (Fv/Fm) was low at both sites at the beginning of the incubations, but increased upon iron fertilization in both water masses, indicating stress relief. However, the acclimation strategies fundamentally differed between the two communities. The ratio of photoprotective versus light-harvesting pigments increased under high light in the Polar Frontal Zone independent of iron enrichment, whereas this ratio declined upon iron enrichment in the Antarctic Zone even under high light. At the same time, the functional cross section of photosystem II (σPSII) decreased upon iron enrichment in the Antarctic Zone, but not in the Polar Frontal Zone. Our experiments support the need to take biogeographical differences between Southern Ocean water masses into account when interpreting ecosystem dynamics. 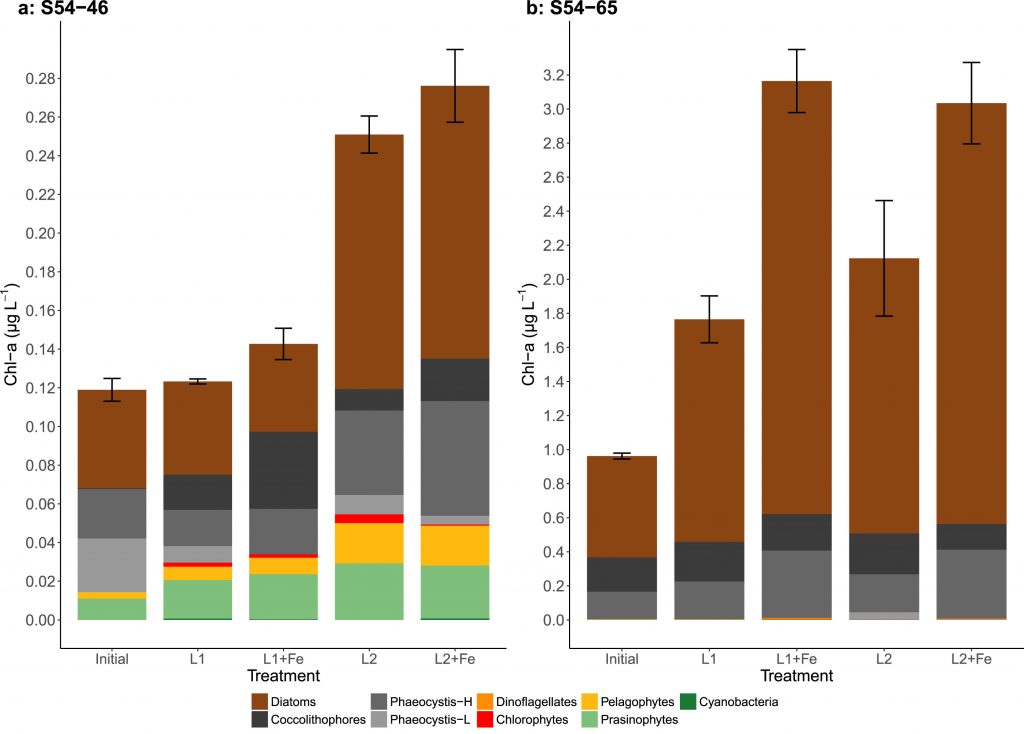