Mesoscale eddies and meanders have been shown to be one of the dominant sources of flow variability in the world’s ocean. One example of an isolated eddy hotspot is the South-West Indian Ridge (SWIR). Several investigations have shown that the SWIR and the corresponding planetary potential vorticity field (f/H) exert a strong influence on the location and dynamics of the Antarctic Circumpolar Current (ACC), resulting in substantial fragmentation of the jets downstream of the ridge. The easterly extension of this eddy corridor appears to be restricted to the deep channel separating the Conrad Rise from the Del Cano and Crozet Plateau. However, while the fate of eddies formed at the SWIR has been widely investigated and the frontal character of this eastward extension is well known, the zone of diminishing variability that extends southwards to approximately 60S remains poorly sampled. Using a combination of Argo, AVISO and NCEP/NCAR datasets, the character of this eddy corridor as a conduit for warm core eddies to move across the ACC into the Antarctic zone is investigated. In this study, we track a single warm-core eddy as it moves southwards from an original position of 31E, 50 20′ S to where it dissipates 10 months later in the Enderby Basin at 561200 S. An Argo float entrained within the eddy confirms that its water masses are consistent with water found within the Antarctic Polar Frontal Zone north of the APF. Latent and sensible heat fluxes are on average 8 W/m2 and 10 W/m2 greater over the eddy than directly east of this feature. It is estimated that the eddy lost an average of 5 W/m2 of latent heat and 5 W/m2 of sensible heat over a 1-year period, an amount capable of melting approximately 0.92 m of sea ice. In addition, using an eddy tracking algorithm a total of 28 eddies are identified propagating southwards, 25 of which are anti-cyclonic in rotation. Based on the new Argo float data, combined with AVISO and NCEP/NCAR datasets, these results suggest that the southward passage of warm-core eddies act as vehicles transporting heat, salt and biota southwards across the ACC and into the eastern boundary of the Weddell gyre. 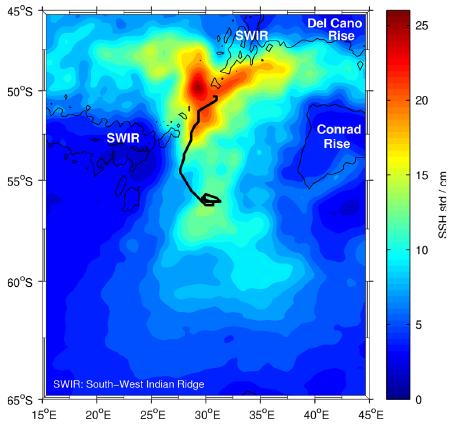 Sea surface height variability for the period 2000-2009. The trajectory of a positive anomaly is identified with a solid black line