The Southern Ocean accounts for 40 % of oceanic CO2 uptake, but the estimates are bound by large uncertainties due to a paucity in observations. Gap-filling empirical methods have been used to good effect to approximate pCO2 from satellite observable variables in other parts of the ocean, but many of these methods are not in agreement in the Southern Ocean. In this study we propose two additional methods that perform well in the Southern Ocean: support vector regression (SVR) and random forest regression (RFR). The methods are used to estimate ΔpCO2 in the Southern Ocean based on SOCAT v3, achieving similar trends to the SOM-FFN method by Landschützer et al. (2014). Results show that the SOM-FFN and RFR approaches have RMSEs of similar magnitude (14.84 and 16.45 µatm, where 1 atm = 101 325 Pa) where the SVR method has a larger RMSE (24.40 µatm). However, the larger errors for SVR and RFR are, in part, due to an increase in coastal observations from SOCAT v2 to v3, where the SOM-FFN method used v2 data. The success of both SOM-FFN and RFR depends on the ability to adapt to different modes of variability. The SOM-FFN achieves this by having independent regression models for each cluster, while this flexibility is intrinsic to the RFR method. Analyses of the estimates shows that the SVR and RFR’s respective sensitivity and robustness to outliers define the outcome significantly. Further analyses on the methods were performed by using a synthetic dataset to assess the following: which method (RFR or SVR) has the best performance? What is the effect of using time, latitude and longitude as proxy variables on ΔpCO2? What is the impact of the sampling bias in the SOCAT v3 dataset on the estimates? We find that while RFR is indeed better than SVR, the ensemble of the two methods outperforms either one, due to complementary strengths and weaknesses of the methods. Results also show that for the RFR and SVR implementations, it is better to include coordinates as proxy variables as RMSE scores are lowered and the phasing of the seasonal cycle is more accurate. Lastly, we show that there is only a weak bias due to undersampling. The synthetic data provide a useful framework to test methods in regions of sparse data coverage and show potential as a useful tool to evaluate methods in future studies. 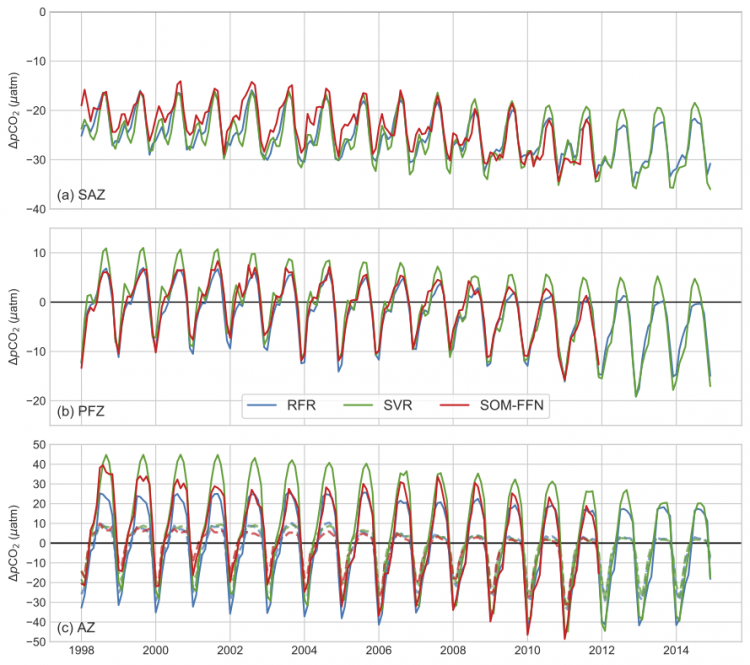 Time series of ∆pCO2 estimates for the three Southern Ocean biomes as defined by Fay and McKinley (2014): SAZ, PFZ and MIZ. The y-axis grid lines represent the same scale for figures (a) through (c). The SOM-FFN estimates are only available until 2011 as it is trained with SOCAT v2, while the SVR and RFR are trained with SOCAT v3. The ∆pCO2 normalized to sea ice cover is shown by dashed lines in the AZ.