Specific gravity is an important parameter in the dispersal of marine zooplankton, because the velocity of currents, and therefore the speed of transport, is usually greatest near the surface. For the South African chokka squid (Loligo reynaudii), recruitment is thought to be influenced by the successful transport of paralarvae from the spawning grounds to a food-rich feature known as the cold ridge some 100–200 km away. The role of paralarval specific gravity on such transport is investigated. Specific gravity ranged from 1.0373 to 1.0734 g cm−3 during the yolk-utilization phase, implying that paralarvae are always negatively buoyant, regardless of yolk content. The data were incorporated into a coupled individual-based model (IBM)—Regional Ocean Modelling System model. The output showed that dispersal was dominantly westward towards the cold ridge. Also, modelled paralarval vertical distribution suggested that hydrodynamic turbulence was an important factor in dispersal. The negative buoyancy of early chokka squid paralarvae may reduce the risk of paralarvae being advected off the eastern Agulhas Bank and into the open ocean, where food is less abundant, so specific gravity may be important in enhancing the survival and recruitment of chokka squid. 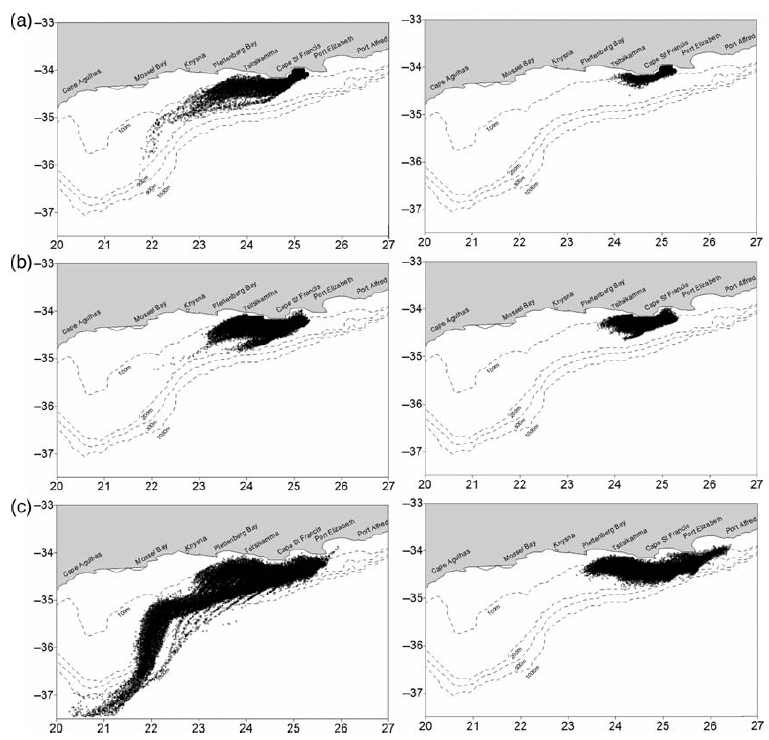