A detailed hydrographic and biological survey was carried out in the region of the South-West Indian Ridge during April 2004. Altimetry and hydrographic data have identified this region as an area of high flow variability. Hydrographic data revealed that here the Subantarctic Polar Front (SAF) and Antarctic Polar Front (APF) converge to form a highly intense frontal system. Water masses identified during the survey showed a distinct separation in properties between the northwestern and southeastern corners. In the north-west, water masses were distinctly Subantarctic (>8.5°C, salinity >34.2), suggesting that the SAF lay extremely far to the south.
In the southeast corner water masses were typical of the Antarctic zone, showing a distinct subsurface temperature minimum of <2.5°C. Total integrated chl-a concentration during the survey ranged from 4.15 to 22.81 mg chl-a m–2, with the highest concentrations recorded at stations occupied in the frontal region. These data suggest that the region of the South-West Indian Ridge represents not only an area of elevated biological activity but also acts as a strong biogeographic barrier to the spatial distribution of zooplankton. 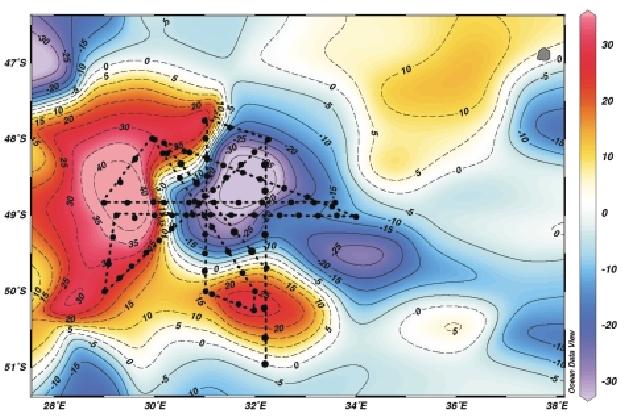