Swart et al. (2010) applied altimetry data to the gravest empirical mode south of Africa to yield a 16 year time series of temperature and salinity sections. In this study we use these thermohaline sections to derive weekly estimates of heat content (HC) and salt content (SC) at the GoodHope meridional transect of the Antarctic Circumpolar Current (ACC). These estimates compare favorably to observed data. The resulting 16 year time series of HC and SC estimates are used to explain the subsurface thermohaline variability at each ACC front and frontal zone. The variability at the Subantarctic Zone (SAZ) is principally driven by the presence of Agulhas Rings, which occur in this region approximately 2.7 times per annum and are responsible for the longest and highest scales of observed variability. The variability of the SAZ is responsible for over 50% and 60% of the total ACC HC and SC variability, respectively. Poleward of the SAZ, the variability is largely determined by the influence of the local topography on the fronts of the region and can be explained by the conservation of potential vorticity. Wavelet analysis is conducted on the time series of meridionally integrated HC and SC in each ACC front and frontal zone, revealing a consistent seasonal mode that becomes more dominant toward the southern limit of the ACC. The lower-frequency signals are compared with two dominant modes of variability in the Southern Ocean. The Southern Annular Mode correlates well with the HC and SC anomaly estimates at the Antarctic Polar Front, while the Southern Oscillation Index appears to have connections to the variability found in the very southern domains of the ACC. 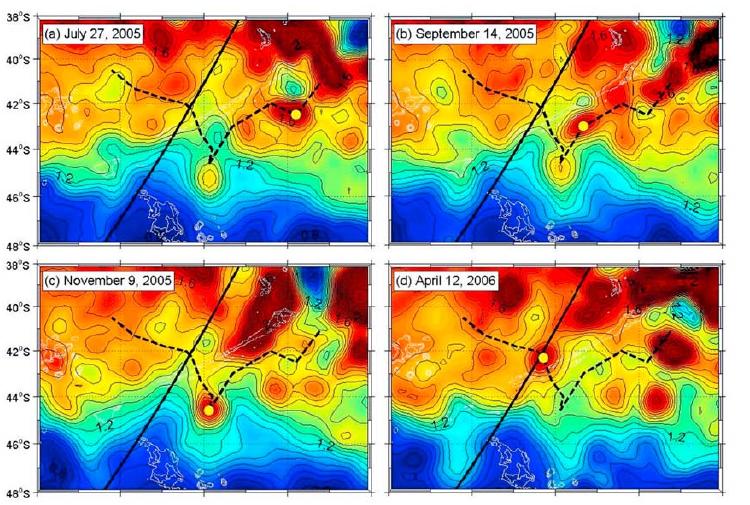 The propagation of an Agulhas Ring into the SAZ is identified using satellite altimetry data. These northerly originating features cause sharp changes in climate and biogeochemical variables in the SAZ.