The Surface Ocean CO2 Atlas (SOCAT) is a synthesis of quality-controlled fCO2 (fugacity of carbon dioxide) values for the global surface oceans and coastal seas with regular updates. Version 3 of SOCAT has 14.7 million fCO2 values from 3646 data sets covering the years 1957 to 2014. This latest version has an additional 4.6 million fCO2 values relative to version 2 and extends the record from 2011 to 2014. Version 3 also significantly increases the data availability for 2005 to 2013. SOCAT has an average of approximately 1.2 million surface water fCO2 values per year for the years 2006 to 2012. Quality and documentation of the data has improved. A new feature is the data set quality control (QC) flag of E for data from alternative sensors and platforms. The accuracy of surface water fCO2 has been defined for all data set QC flags. Automated range checking has been carried out for all data sets during their upload into SOCAT. The upgrade of the interactive Data Set Viewer (previously known as the Cruise Data Viewer) allows better interrogation of the SOCAT data collection and rapid creation of high-quality figures for scientific presentations. Automated data upload has been launched for version 4 and will enable more frequent SOCAT releases in the future. High-profile scientific applications of SOCAT include quantification of the ocean sink for atmospheric carbon dioxide and its long-term variation, detection of ocean acidification, as well as evaluation of coupled-climate and ocean-only biogeochemical models. Users of SOCAT data products are urged to acknowledge the contribution of data providers, as stated in the SOCAT Fair Data Use Statement. This ESSD (Earth System Science Data) “living data” publication documents the methods and data sets used for the assembly of this new version of the SOCAT data collection and compares these with those used for earlier versions of the data collection (Pfeil et al., 2013; Sabine et al., 2013; Bakker et al., 2014). Individual data set files, included in the synthesis product, can be downloaded here: doi:10.1594/PANGAEA.849770. The gridded products are available here: doi:10.3334/CDIAC/OTG.SOCAT_V3_GRID. 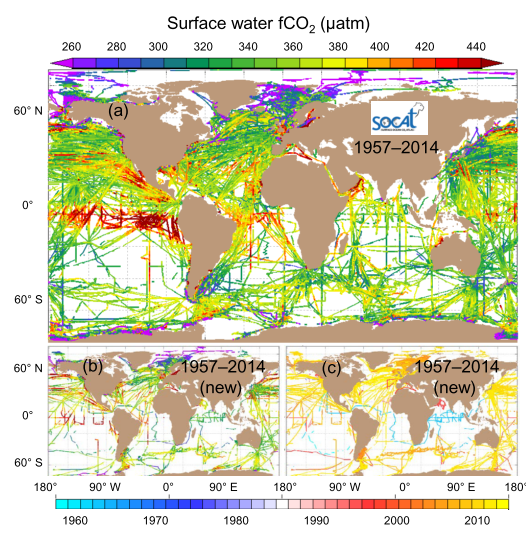 Global distribution of (a) all and (b) newly added surface water fCO2 values (µatm) and (c) the timing of the newly added data sets in SOCAT version 3 with data set flags of A to E. Version 3 has data sets from 1957 to 2014.