Due to its importance as a limiting nutrient for phytoplankton growth in large regions of the world’s oceans, ocean water column observations of concentration of the trace-metal iron (Fe) have increased markedly over recent decades. Here we compile >13 000 global measurements of dissolved Fe (dFe) and make this available to the community. We then conduct a synthesis study focussed on the Southern Ocean, where dFe plays a fundamental role in governing the carbon cycle, using four regions, six basins and five depth intervals as a framework. Our analysis highlights depth-dependent trends in the properties of dFe between different regions and basins. In general, surface dFe is highest in the Atlantic basin and the Antarctic region. While attributing drivers to these patterns is uncertain, inter-basin patterns in surface dFe might be linked to differing degrees of dFe inputs, while variability in biological consumption between regions covaries with the associated surface dFe differences. Opposite to the surface, dFe concentrations at depth are typically higher in the Indian basin and the Subantarctic region. The inter-region trends can be reconciled with similar ligand variability (although only from one cruise), and the inter-basin difference might be explained by differences in hydrothermal inputs suggested by modelling studies (Tagliabue et al., 2010) that await observational confirmation. We find that even in regions where many dFe measurements exist, the processes governing the seasonal evolution of dFe remain enigmatic, suggesting that, aside from broad Subantarctic – Antarctic trends, biological consumption might not be the major driver of dFe variability. This highlights the apparent importance of other processes such as exogenous inputs, physical transport/mixing or dFe recycling processes. Nevertheless, missing measurements during key seasonal transitions make it difficult to better quantify and understand surface water replenishment processes and the seasonal Fe cycle. Finally, we detail the degree of seasonal coverage by region, basin and depth. By synthesising prior measurements, we suggest a role for different processes and highlight key gaps in understanding, which we hope can help structure future research efforts in the Southern Ocean. 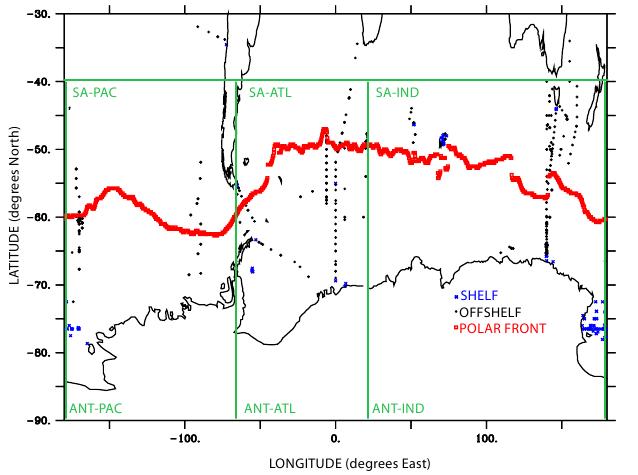 Distribution of iron data in the Southern Ocean with regional breakdown for different ocean regimes and basins.