SOCCO has setup five world class research facilities (ocean robotics, bio-optics and biogeochemistry, CO2, trace metal iron biogeochemistry and high resolution modelling) to address our multidisciplinary science objectives. These facilities now form part of the core of SOCCO as well as the South African ocean – climate science landscape stimulating funded international collaborations. Having access to world class technological facilities is fundamental to being able to produce first rate science and capabilities necessary to meet national goals. Another opportunity that comes from having access to technologically advanced infrastructure is the innovation potential that can be leveraged through the development of new technology, prototypes and technology demonstrators that can advance industrialisation by transforming the use or application of conventional products or services. These highly technical platforms continue to provide training in both scientific and technological research innovation to ensure growth in R&D. 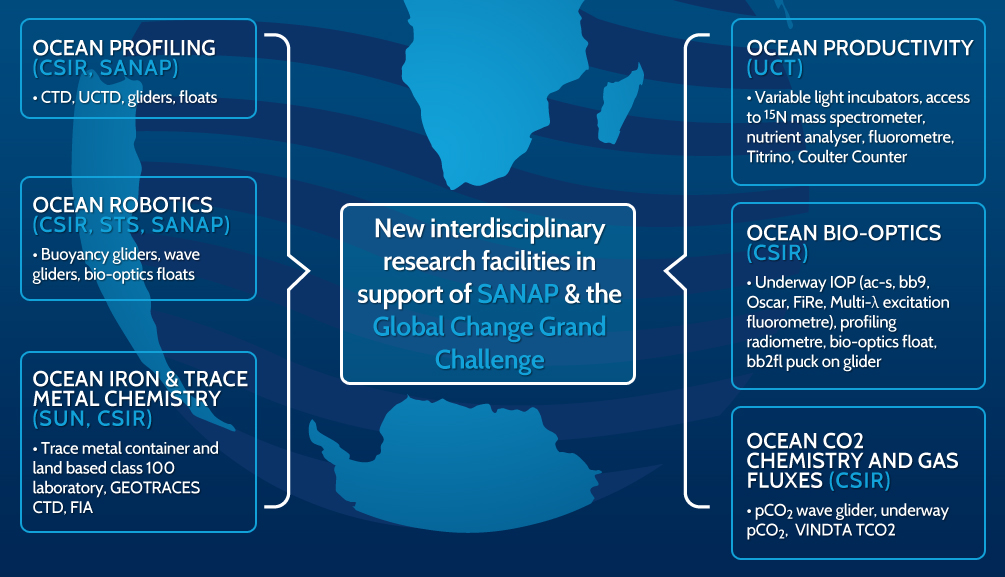 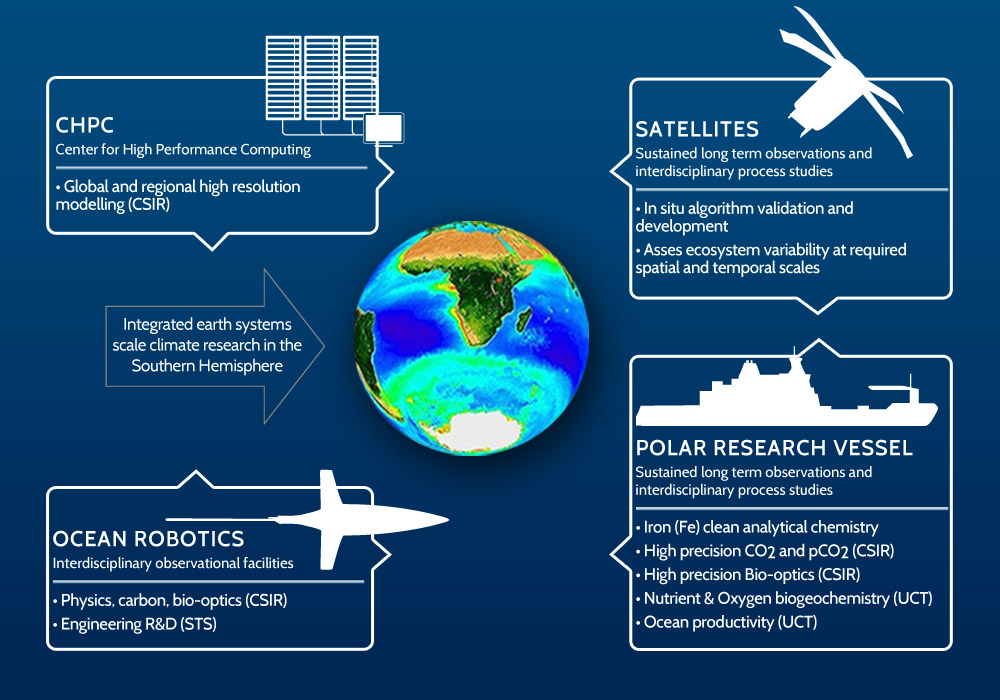 Autonomous ocean robots are the future of marine research and environmental monitoring. This is because of the high costs and man-power associated with ‘snapshot’ observations made by ships and because today we require high quality, high-frequency sampling to support on-going world class oceanographic and climate research. The CSIR-led South Africa Marine Engineering & Robotics Centre (SAMERC) in Cape Town presents a state-of-the-art facility that (1) provides a glider-port for maintaining and piloting both profiling and surface gliders, (2) services and calibrates ship-based equipment and sensors for ocean profiling (e.g., CTD, UCTD, XBT), and (3) serves as a platform to grow technological R&D and marine engineering innovation in South Africa. This facility functions in collaboration with Sea Technology Services (STS) and is hosted by DEA-SANAP

The Centre also maintains specially adapted biogeochemical profiling floats, ship-mounted heat flux sensors and the profiling equipment deployed from ships. The profiling equipment includes a full standard and Geotraces CTD carousel with 24 x 20 litre Niskin Bottles and auxiliary sensors for measuring key physical, biogeochemical and bio-optical properties of the water column. An underway-CTD (UCTD) for acquiring temperature and salinity profiles of the ocean to 500m depth, while the ship is steaming, is also part of the Centre’s gadgets.

These new capabilities have begun to attract a number of engineering students that complete their in-service training and BTech projects at the Centre. This advances human resource development in scarce skills in the fields of marine technology, robotics engineering and scientific sensor development that contributes to innovation in South Africa.

The following equipment is available:

A South African commitment to having a much greater role in both regional and global science has been articulated by the Global Change Grand Challenge science plan prepared by the science community at the request of DST. Key to gaining new knowledge depends on enhancing our observational technological skills, including numerical modelling. The commitment by DST, Treasury and DEA: SANAP to invest in advanced cluster computing facilities (CHPC and SANReN) and a new research vessel (SA Agulhas II) were catalytic in giving significant encouragement to the SA science community to invest research energy in the Southern Ocean domain. These together with the Global Change Grand Challenge were the context that let CSIR-NRE to place the Southern Ocean into its strategic research plans.

A number of new research facilities are already operational and each has been located and developed at institutions that are identifiably strong in the field so that this investment is strongly leveraged by a sustained research interest and HCD plans.

All these facilities are set up to interface with the new polar research ship and the Centre for High Performance computing to grow a 21st century Ocean research capability in South Africa.

Related News and Publications
National Integrated Cyberinfrastructure System (NICIS) Centre for High Performance Computing (CHPC) supports the high performance computing needs of the research community as well as industry for South African and African users with supercomputing hardware and software infrastructure and technical expertise to run domain-specific applications. Through the Lengau (Setswana name for Cheetah) CPU cluster, the CHPC supports the running of SOCCO’s high resolution models and analysis. At its launch in 2016, Lengau was ranked amongst the top 500 supercomputers in the world, it currently consists of over 30 000 CPU cores and 3 Pb of data storage. Additionally, the CHPC’s GPU cluster supports SOCCO’s machine learning applications to close the gap between observations and models.